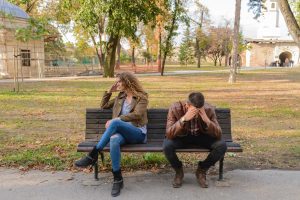 I would be the first to admit that to do anything well we need to put in effort. Think of a job, school, athletics, raising children – we need to put in effort if we want to be good at any of those activities. The right tools just make the job a lot easier. Whether you are a plumber, carpenter, chef, teacher or a machine operator – good tools make the job less difficult.

My contention is that the tools are available in today’s world to have the kind of relationship that we all want. On a scale of 1-10 with 10 being the best and 1 not so good, I believe we can consistently live at 9 or 10.

But if you look at the history of relationships down through the centuries, what we are attempting to create in the 21st century is very recent on the evolutionary calendar. From hunter/gatherers to farming and even into the beginning of romanticism in the 18th century, it was pretty well a male-dominated universe. Often, women were seen and treated as property.

It wasn’t until the second half of the 20th century that the women’s movement gained momentum. The divorce rate skyrocketed as they demanded to be treated as equals.  Generally speaking, there just wasn’t a good model for what a true partnership relationship might look like.

In the late 1970s and early 1980s Harville Hendrix and his wife Helen LaKelly Hunt cobbled together what is now known as Imago Relationship Therapy. It provided a working model and good tools for couples to create a partnership relationship; one that was safe, connected and fully alive. The key to a great relationship is safety. Why?  Because of our brain stem, that oldest part of our brain which we share with all mammals, fish, birds and reptiles.

If I don’t feel safe I will defend – that goes back 500 million years and we won’t change it. So what tools do we need to remain safe? I believe there are four key skills or tools, which if couples can learn and implement, they will have a much better chance to create the relationship they truly want.

As we said at the start, any job is easier with the right tools. These four key skills or tools, make any relationship much less difficult.

Thank you for joining me in Part 3 of the Space Between Series. Here, we will explore Safe Conversation. Last week I suggested that the fastest way forward for any couple is to pay attention to the Space Between. It is a real energy field and you can tell can’t you, when there is tension? […]

Here is Part 1 of a series I’m calling The Space Between. Last week we looked at creating a Relationship Vision as a good start to 2023. If your relationship worked out just the way you wanted it, what would it look like? And then committing to doing what was necessary to move toward that […]

That's how he likes to think of himself - a coach. John Sullivan won't fix your relationship. He gives you the tools to help you build permanent and lasting connections and a deeper intimacy with those in your life.